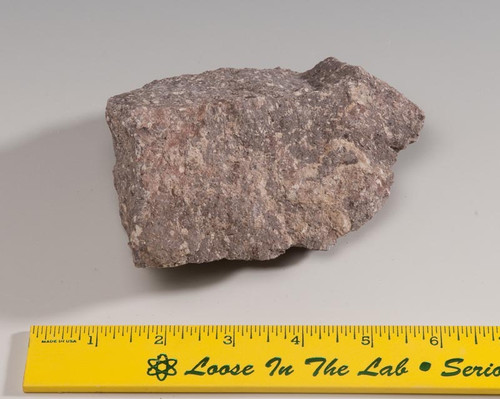 This sample was collected in Central Utah. The specimen is a mauve color with white and black speckles. In addition to large eruptions that remove entire mountain tops and relocate them to various other areas, andesitic volcanos often produce smaller eruptions which emit hot gases and ash. In these gas and ash eruptions, the gases, which are heavier than air, spill out of the vent and over the side of the volcano. Think of it as a wave. The ash then rides this wave of gas down the side of the volcano. If the ash is still hot and sticky when it erupts from the volcanic vent, it fuses together when it reaches the base of the volcano, forming a soft rock called ignimbrite or welded ash.