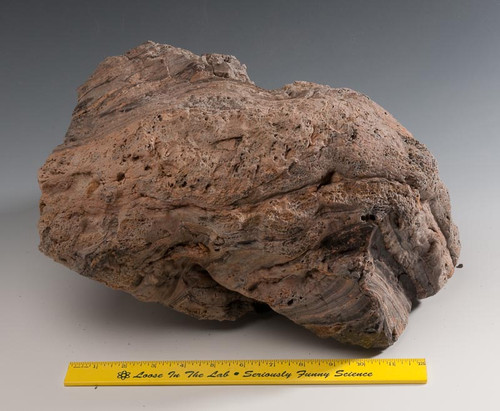 This rock started out as a glob of glass-rich, molten lava full of dissolved gas stuck in the neck of the cinder cone. When the cinder cone erupted, shooting globs of hot molten lava through the air, three things were happening at virtually the same time. The gas that was dissolved in the glob of lava started to expand very rapidly, producing thousands of tiny holes. Just like a popcorn kernel popping open. At the same time the outside of the bomb was cooling very quickly, forming a hard shell. As this still gooey glob was shooting through the air, expanding on the inside and hardening on the outside, gravity and the friction of the air moving past the glob was tugging and twisting the lava, forming the beautiful patterns you see on the outside of the bomb.